Welcome To Another Episode Of My Book Recommendations Series !

You can Check Out the Previous Episodes Here.

In This Episode , We are going to Explore Colleen Hoover Books . I’ve already read all Of this Amazing Author books , I can’t say that I’ve loved them All , I actually hated one Of them ( Ugly Love ) and Had to DNF another one ( November 9 ) But , At the same time , Three of Her Books Are actually my favorites In the romance Genre ! I chose these three books for Today’s episode to talk about , as I always recommend them .

The First Book is My all time Favorite by Colleen Hoover ——> Without Merit .

This  story is  about a girl who is suffering from depression and her journey toward Recognition and Treatment , it’s a story about family , friends and relationships , a story about love .

If you are interested in realistic stories about suffering and fighting , this one, is for you . And for me , it has a great place in my heart , because it helped me during one of the  hardest periods in my life.

” Not every mistake deserves a consequence. Sometimes the only thing it deserves is forgiveness.

The Voss family is anything but normal. They live in a repurposed church, newly baptized Dollar Voss. The once cancer-stricken mother lives in the basement, the father is married to the mother’s former nurse, the little half-brother isn’t allowed to do or eat anything fun, and the eldest siblings are irritatingly perfect. Then, there’s Merit.

Merit Voss collects trophies she hasn’t earned and secrets her family forces her to keep. While browsing the local antiques shop for her next trophy, she finds Sagan. His wit and unapologetic idealism disarm and spark renewed life into her—until she discovers that he’s completely unavailable. Merit retreats deeper into herself, watching her family from the sidelines when she learns a secret that no trophy in the world can fix.

Fed up with the lies, Merit decides to shatter the happy family illusion that she’s never been a part of before leaving them behind for good. When her escape plan fails, Merit is forced to deal with the staggering consequences of telling the truth and losing the one boy she loves.”

5 stars read , Beautiful , sweet and heartbreaking story about first love , new beginnings , family , children and choosing the best for them ,  even when it hurts .

The story was so mature and realistic more than her other novels .

I like how Hoover discussed Difficult Concepts ( Domestic Violence against Women , intended or ..Not )  In a Perfect way from other perspectives that we don’t usually hear from .

A highly recommended book for everyone , not just Romance Lovers .

” Sometimes it is the one who loves you who hurts you the most.

Lily hasn’t always had it easy, but that’s never stopped her from working hard for the life she wants. She’s come a long way from the small town in Maine where she grew up — she graduated from college, moved to Boston, and started her own business. So when she feels a spark with a gorgeous neurosurgeon named Ryle Kincaid, everything in Lily’s life suddenly seems almost too good to be true. Ryle is assertive, stubborn, maybe even a little arrogant. He’s also sensitive, brilliant, and has a total soft spot for Lily. And the way he looks in scrubs certainly doesn’t hurt. Lily can’t get him out of her head. But Ryle’s complete aversion to relationships is disturbing. Even as Lily finds herself becoming the exception to his “no dating” rule, she can’t help but wonder what made him that way in the first place. As questions about her new relationship overwhelm her, so do thoughts of Atlas Corrigan — her first love and a link to the past she left behind. He was her kindred spirit, her protector. When Atlas suddenly reappears, everything Lily has built with Ryle is threatened.”

The last book for todays’ Episode is Hopeless .

Well, Hopeless is very different from the books I’ve mentioned above , A mysterious , heartbreaking and emotional Book .

After finishing it , years ago , I had difficult time sorting my opinions about it , It wasn’t an instant favorite , but at the same time , I loved it so much too .

You MAY  have to prepare your heart , because this book MAY break it for you 😛 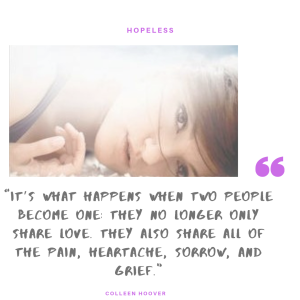 That’s what seventeen-year-old Sky realizes after she meets Dean Holder. A guy with a reputation that rivals her own and an uncanny ability to invoke feelings in her she’s never had before. He terrifies her and captivates her all in the span of just one encounter, and something about the way he makes her feel sparks buried memories from a past that she wishes could just stay buried. Sky struggles to keep him at a distance knowing he’s nothing but trouble, but Holder insists on learning everything about her. After finally caving to his unwavering pursuit, Sky soon finds that Holder isn’t at all who he’s been claiming to be. When the secrets he’s been keeping are finally revealed, every single facet of Sky’s life will change forever.”

That’s it for this Part ❤

Have you read any books By Colleen Hoover ? Which One is your favorite ?

Stay strong and change the world .

Through this blog, I express my love for books, write about my journey In Medical School and some tips from my real-life experiences .

“Bennie, If you can read , you can learn just about anything .” My Life , Ben Carson.